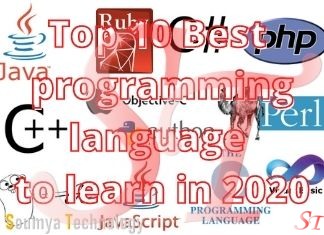 What is Programming language?

We can say that A programming language is a set of commands, instructions, and other syntax use to create a software program. When programmer use to write code are called “High-level language” and then that code can be compiled into a “low-level-language” which is recognized directly by the computer.

Here we discuss 10 best programming language which you need to learn in 2020 based on the numbers of jobs posting listed on job search site indeed, the average annual salary for those jobs, and factors such as ease of use and potential for growth.

Java is high-level language. There are many reasons behind learning java. Firstly it is not much easier to learn than other programming language, and also you don’t need to be a pro in math to start coding. You just have to understand logic and that is enough for java. Java can be harder for a freshman to learn, than other language. Java is released in 1995 so that this language is oldest one.

Java is best because it helps you to understand the inner working of programming as well. Firstly you should learn python than java so that things it makes things easier.

3 billion devices run on Java, according to Oracle research. I think this is a big data and from this data now you totally understand that why you should learn Java.

C++ is object-oriented programming language. C++ is also high-level language and allows us to have a lot of control as to how you use computer resources, so in the right hands its speed and ability to cheaply use resources should be able to surpass other language. Many games are built with C++.

It is powerful, efficient and fast language. It used to develop desktop apps, games and games engine. C++ is good for beginner who wants to learn programming.  C++ includes concepts like classes, inheritance, data abstraction, encapsulation and polymorphism that allow code reusability and makes a program even more reliable.

If you will be master in C++ then it’s super easy to learn java because most of the concepts are same in java.

If you want to be a web developer then you should learn JavaScript (JS). It will enable you to build websites from scratch-a pretty useful skill to have in today’s job market!

For web apps and websites continue to thrive and grow in popularity, learning JavaScript in 2020 is a wise choice.

C# is readable, simple and easy to learn and use and It is all about developer productivity.

It is open source and led by Microsoft.

C# becomes a multi-paradigms, functional and generic language. It enabled developers to implement data structures and algorithms that were parametric with types.

Python is easy to learn and many significant applications only support python language and this is the main reason of popularity of python. Python used for data science, network serves, machine learning, desktop applications and many more. Python provides us several open-sources libraries, frameworks and modules that make application development a cakewalk.

GitHub statistics tells that both C and C++ is still one of the most popular programming languages around.

It is one of the many server-side languages you can build websites also. PHP joins other languages such as Ruby, ASP.NET, R.PHP and Java.  It has ability to scale the largest web sites while at the same time having an easier learning curve than other languages.

50% of internet websites are built using PHP. So we can say that how much PHP is important by this point. PHP is still a great choice if you don’t already know it.

It is statistical programming language, developed by Scientists that has open source libraries for statistics, machine learning and data science. It provides access to a wide range of statistical and graphical tools, from the ability to perform time-series analysis to the ability to cluster data. R is used because It allows us to generate professional data plots and visualizations using mathematical formulas.

It was not build to make programmers lives better it’s more about software engineering; It has one straightforward approach it multiplexes Goroutines over OS threads.

GO focuses on readability, concurrency, simplicity and conciseness. Go provide us high performance like C++/C, super efficient concurrency handling like Java and fun to code like Perl or Python.

Go is important because it is clean, expressive, concise and efficient. GO is excellent in handling multiple programs.

Swift is good for beginners because it is safer, fast, and enables a level of interactivity in development. Swift’s clean syntax is easier to write and read.  In Swift Build-in design features and algorithms give us real-time feedback while cutting out the menial tasks that can slow programmers down.

If we want to develop native iOS or Mac apps then you should learn Swift.

Hope, now you totally understand that which language you need to learn, and what is good for you.