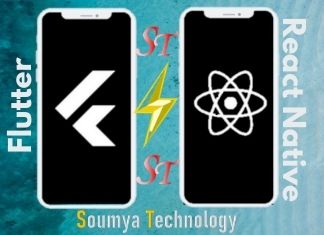 Today We discuss About Flutter and React : Which one is BEST for you in 2020 .

There was a time when good mobile applications were about their design, but in 2020 a lot has changed and users have more inclination for app performance.

In addition, mobile application performance has become the ultimate standard for grading its customer experience. And all depends on the underlying framework provided by their operating system.

Now, if you are developing your business app and doubt arises in choosing the right framework for your mobile app then we can help. There are many cross platform mobile app development frameworks.

But, the two main frameworks that have started an open war for its adoption are: Flutter and React Native.

Google’s Flutter and Facebook’s Reactive Native are two cross-platform app development technologies that are causing a stir in the tech world.

In this post, we will talk about them, performing a detailed comparison Flutter and React , knowing its pros and cons to decide who stands out in this mobile app development battle from a developer’s point of view.

Flutter is initial release on May 2017 it means that Flutter is new than React because React is invented in 2013.

Good thing about Flutter is that it is free and we can use it for building any application.

It is open-source mobile SDK that can be used to create native-looking Android and iOS apps from the same code base. Flutter is used as a framework that you can build great UI with.

Flutter is very popular open source because Google today revealed that “nearly half a million developers” use It for UI framework each month.

It gives developers an easy way to build and deploy visually attractive, natively-compiled applications for mobile (iOS, Android), web, and desktop – all using a single codebase.

React is efficient, flexible and declarative JavaScript library for building user interfaces. React is used as a base in development of single-page or mobile applications. You can make your JavaScript better with using React.

React is also popular like Flutter because it gives developers the ability to work with a virtual browser library which is more friendly than real browser but working with the DOM API is quick hard.

What is React Native for?

React Native is an effective framework for:

Using the same design as React

Developing applications for both iOS and Android  using a single codebase

Popular Apps are Made with Flutter and React Native?

Hope now you totally understand about flutter and React and now also you come to know that which one is best for you? If you want to be master in JS(JavaScript) then you should use React or React Native and for other development you can use flutter too because Flutter also provide you best features for their users.