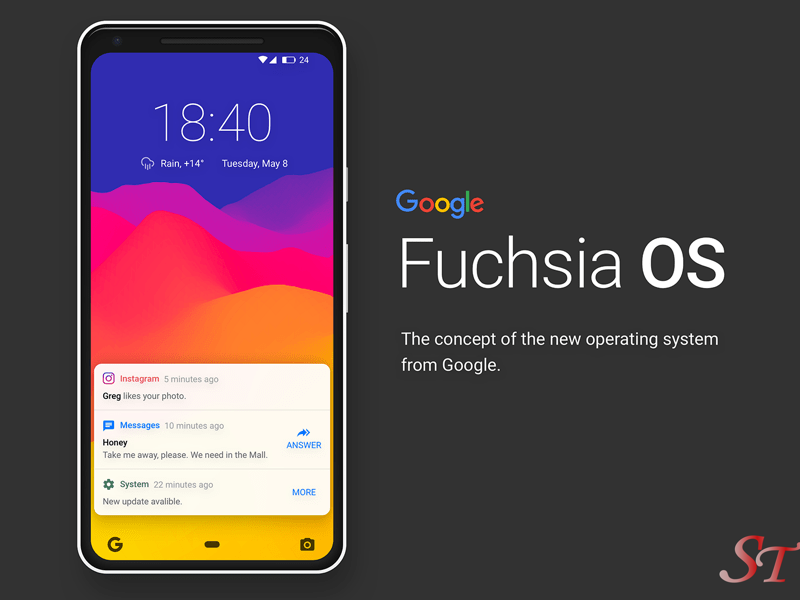 Are you wondering, “What is Google working on?” Fuchsia OS is the answer. But what is fuchsia OS ? Let’s dive into it.

In 2016, Google started working on a new operating system known as Project Fuchsia that sent the mobile industry into a vortex. Several experts have speculated that Google Fuchsia OS will be the next big thing in an operating system and is considered as the alternative OS to Android. But as of now, there isn’t a single word from Google about its new OS.

A new spark was added in Google Fuchsia OS last year with the unveiling of an early home screen design. Then we saw it run in the Pixelbook, indicating a change to Android and Chrome OS processes.

Therefore, when a lot happens in the Fuchsia project, it becomes imperative to know about this emerging OS.

With Google OS in the very early stages of development, it will be interesting to see how it will differ from Android and Chrome, and it will be flexible enough to replace either.

Google Fuchsia OS made its debut on the GitHub repository as Google’s open source operating system.

According to a preliminary assessment by the tech press, the idea behind Google’s new mobile OS was to make it a “universal” operating system, which could run on every platform such as phones, tablets, connected devices, smart home devices, and more

The universal OS concept was tested by Microsoft and Apple in the form of real Windows 10 and OS X respectively but did not run as expected. Linux is the only platform that is somewhat related to the term universal operating system. Linux kernel is widely used in Chrome OS, Android, routers, modems, set-top boxes, and smart devices; Which makes it work on different platforms.

Now it’s Google that is trying to design an ultimate universal OS in the form of Fuchsia, the new OS.

Why can Google Fuchsia OS replace Android and Chrome?

Google next OS was designed from scratch and developed in the form of a small kernel called Zircon. On the other hand, Android and Chrome OS use a heavily modified version of Linux kernel. So, to get rid of Linux kernel heavy version, micro-kernel for Google OS can be really helpful.

The traditional OS kernel differs from the microkernel core, but the most important thing about both is that the microkernels are built from the ground, which perform well for efficiency and flexibility.

As we have moved on to smaller, more efficient and more portable devices, it is important that the small core is used and makes Fuchsia a perfect fit for the next generation OS.

The one thing that Google will try to implement with its new OS is that it will have full control over the open source core operating system, even if partner companies distribute it.

Will developers be affected by Google’s new OS – Fuchsia?

At the moment, developers do not have access to the Fuchsia OS, but when it becomes available, developers will be free to develop applications using any programming language with the help of the new Flutter software development kit.

The Flutter framework is known to properly support the development of apps that are compatible with Fuchsia, Android, and iOS. Hence, it will be a boon to the developer community, as a single app for all platforms will be possible with minimal investment.

Another benefit of Flutter is that it is built on multi-dimensional design, Google’s current visual design standard, which is compatible with Android, Chrome OS, and web features. It supports advanced user interface elements such as volumetric shadows and super-smooth animations at 120 fps. It even supports gaming and media apps but then performance will also depend on hardware setup.

If we take into account Chrome OS, most of its apps are web based, but now it can also run Android apps for Google Android OS and with every update its capacity is greatly expanded.

“My team adds support for Apple-owned Swift for targeting the fuchsia color.”

“My team plans to contribute to lib / Syntax – we’re interested in screening, coordination and rebuilding.”

With all this in hand, the developers will find it easy to run Google Fuchsia OS or switch platforms. According to our evaluation, it should be a smooth transition.

The current UI of Google’s new mobile OS is called “Armadillo” and it’s still in the testing
phase. It is expected to have some cool capabilities that may change the way
applications are designed with user interface.

As we know, the main screen of the new Google mobile operating system features a vertically scrollable list of apps. The profile card here includes some basic settings,
profile picture, date and time. Then there is a search bar similar to what we have Android and Gboard devices with a few different functions.

With no real apps to run on the Google OS the user will see placeholders, but one can freely experience the multitasking features, which are really cool. For example, when you drag an app to another, there will be an option for split screen mode and when you come home, you can drag more apps to use them simultaneously.

There is not much we can tell you about the still in its infancy Google OS, here are the things that make it an interesting choice:

The physical design of Google OS is something you’ll love. She has her own projector and Escher designed specifically for shades. To give components depth, notifications, buttons, windows, and popups are layered in clean layers. The wallpaper looks more like a view from a window.

From current usage, Google Fuchsia OS seems designed to integrate Google Assistant in a much better way; At least from Android. User usage like activity on screen, app drawer, camera usage, or anything else will be visible to Google Assistant.

When you tap on the home screen, Android analyzes the screen for information, but Fuchsia is expected to go deeper and bring more information compared to Android. For example, while checking out a

restaurant in Fuchsia, a user might see the review, then go to the calendar to check the dates, and say “Okay Google,” set a team lunch date – guess what? It will be done.

With the increase in the number of smart devices, we have phones, tablets, desktops, laptops and modern wearable applications. So, to meet all platforms to work, Google is trying to design Google Fuchsia OS in such a way that it can run on any device with similar user experience.
Today, there is the problem of maintaining progress and context while dealing with different devices.
But with Fuchsia, the user has to log into their Google account and the device will save the information across all devices.
This is done with the help of Ledger, which is a distributed storage system that stores everything in the cloud.

Since Android and Chrome OS are based on Linux, Android had trouble patching to the latest Linux kernel as it was relying on the device’s OEMs, but Treble was introduced to correct this issue.
However, some OEMs don’t include Treble in their devices and they leave users vulnerable to new exploits.
But if we talk about fuchsia, it has a kernel dedicated to it, which is zircon, which can be upgraded as desired. To achieve this, applications’ access to the direct kernel is restricted. Adds more security to the
device and makes the application compatible after system upgrade.

When can we get fuchsia?

That being said, Google Fuchsia OS is in its infancy, and frankly, we can’t predict its arrival yet. Even Google is strict about Fuchsia development, let it roll. So far, Google has only confirmed that Fuchsia is a real thing that has huge support.

Fuchsia’s default presence can be taken out of Google’s own repository and GitHub, indicating Fuchsia is its source code.

According to all the facts and analyzes available, it is difficult to even predict the next OS from Google because all too often, projects can be hindered due to multiple factors. If all goes well, fuchsia might see the light of day, and we’re all excited about the same.

If Google’s new OS enters the market, it will likely be the successor to Android and possibly Chrome.