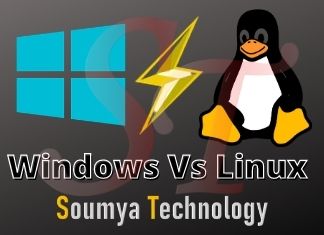 Are you planning to buy a new PC? Do you want to change your current operating system? Are you confused about whether Windows is better than Linux? Then this article is for you which is giving information and comparison between Linux vs Windows. Linux vs Windows is an age-old battle that has been deliberate for years now. It is important to emphasize that there cannot be a single answer to the ‘best’ operating system, as the best really depends on the needs of the user. While we discuss the pros and cons of both systems, we hope to give an unbiased review on specific criteria.

Difference between Linux and Windows

But before we start, let’s know that the difference between both Linux and Windows is slightly better.

What is Windows operating system?

The Windows operating system was first released by Microsoft in 1985. It now boasts the largest user base worldwide. With a series of updates over the years, each OS system comes with a unique graphical user interface, which allows users to view files and work on their system. Most of the systems we see today work on Windows operating systems, which are designed to work on x86 hardware including Intel, AMD and more. The latest version of Windows is Windows 10, which was released as a successor to Windows 8.1 in July 2015.

What is Linux operating system?

The Linux operating system is an open-source OS, built in the early 1990s by Linus Torvalds. Based on Unix, Linux allows users to modify existing code and produce different versions or distributions of it, which they can then use and even sell. Linux has emerged as the top choice for installing servers, which is why most web pages on the Internet are served through a system supported by one of its distributions. The OS is popularly used in desktop, mobile, console, ebook reader and more.

Both Linux and Windows can be considered one of the top operating systems in the world, and both have solidified their place in the computing world. This article will discuss some features of the two operating systems and make a meaningful comparison to help you select the best OS for your needs. Below are some major differences between the two systems:

The Linux OS and most of its utilities and libraries are completely free and open source for use and modification. While paid distributions of Linux OSs with additional support are available in the market, they are very moderately priced. Linux, under the GNU General Public License, allows users to modify, re-use the umpteen number of systems and even sell their own modified versions.

Microsoft Windows OS comes with a Microsoft license, which does not give users access to the source code. Thus, no modification can be done at the standard user level. The Microsoft license ranges from $ 70 to $ 200 for its standard versions, and can only be installed on the n ‘number of computers specified in your purchase.

This can be a difficult comparison, as it can vary from one person to another. However, Linux has re-built its utility over the years through continuous modernization. With the release of distributions such as Linux Mind, the installation and setup process has been simplified. Through continuous updates, people with little or no technical knowledge can also install software and play email, music and video and browse the Internet.

Windows comes pre-installed on many devices due to market dominance. If you are buying a new device, there is a high probability that it will come with a Windows OS version. With market dominance, most users are already accustomed to its interface. In addition, the easy to use toolbar and easy installation of programs is an excellent option for both new and old users.

As Linux has a vast user base worldwide, massive online support is available for Linux. The Linux OS community provides support to users through forums, question boards, and support websites.

Windows OS has integrated and online support system, easily accessible support through dedicated websites and forums. In addition, many videos and books about Windows are available online for people of all skill levels.

Since Linux is open-source and can be easily modified, there are many distributions available that are highly customizable based on user needs. If you have knowledge of the code, you can change the code yourself and modify the OS.

In Windows OS, customization is not easy and only a few user optimizations are available.

When it comes to speed, Linux easily wins Windows. Unlike Windows, Linux tends to reduce ‘bogging’ after the use of multiple processes. The file system in Linux does an admirable job of keeping Ext4 devices efficient. Defragmentation is now dead and buried in Linux. There is no harm in stating that sensible and minimal usage of any Windows OS can slow it down to unbearable and unmanageable levels, which can only be avoided if a strict usage plan is followed. Memory and disk hogging are common when multiple processes are being used.

In the last few years, Windows has become a rapidly driven advertisement. Even though users can opt out, Microsoft has now set its perspective on advertising. In addition, Windows knows what you’re doing on your PC, to improve the assistant, sync with OneDrive and behavior analysis via Cortana. Many people are fond of the devices that Microsoft Windows provides, but they are intrusive regardless.

On the other hand, Linux users have an operating system that takes into account the privacy of their users. Linux devices are also built with state-of-the-art encryption, meaning that users can ensure better security and less intrusions from third-party applications.

Linux is generally more secure than Windows. Despite attack vectors still being discovered in Linux, due to its open-source technology, anyone can review vulnerabilities, making the process of detection and resolution faster and easier. Meanwhile, even though Windows has long made efforts to improve its security system over the years, it is still the primary target for malicious hackers. Due to its large user base, Microsoft is always vulnerable to new threats.

A run level can be defined as the state of init (the first process initiated during booting) and the entire system that defines which system services are running. Run levels are identified using numbers. While Linux may stop at different run levels, Windows will reboot to run level 3 to fix an administered problem.

In Linux OS, command line is a very easy and powerful tool used for administration and daily tasks. In Windows, the Windows cmd ‘command can be used to open the command line and perform a basic set of operations. This is PowerShell to create for limited command line applications.

The Linux OS, since its initial release, has a strong focus on system security, process management, and uptime. Over the years, Linux has never lagged behind in focusing on these. Therefore, it can be called the notoriously secure and reliable operating system.

Conversely, even though Microsoft has improved its reliability over the years, it is still not on par with Linux. This allowed many features to be known for user-friendliness and ease of access, which could lead to system instability and security vulnerabilities, thus making Windows not very reliable compared to Linux.

In Linux OS, the user has complete control over when and what to install the update. Also, without reboot, the update process is even faster.

However, Microsoft Windows is notorious for its random updates, which come at an inconvenient time. For novice users who do not know much about update settings, there is no option, but the computer has to leave once again before downloading and installing again.

Windows wins the gaming race by a large margin. Steam, Epic, and many other clients are available to Windows users, giving them the opportunity to play both AAA titles and small indie games. While Linux is slowly making its way into the gaming market, with the introduction of beta support for many games, it is still a long way to go. If you buy a Linux OS, you will not miss a large number of games. In addition, graphic card manufacturers focus their support on Windows due to the large user base.

So there you have it. This article shares an overview of the differences between Linux vs Windows operating systems. If you want to change your operating system from Linux to Windows or the other way around, we hope that this article has provided you with important insights into the pros and cons of the two systems. Do you think we left any useful point in the article? Let us know in the comment section below. You can also check out some Linux System Administration tutorials and courses, which can help you get started with Linux.